Use the following links to support my work and YouTube channel. 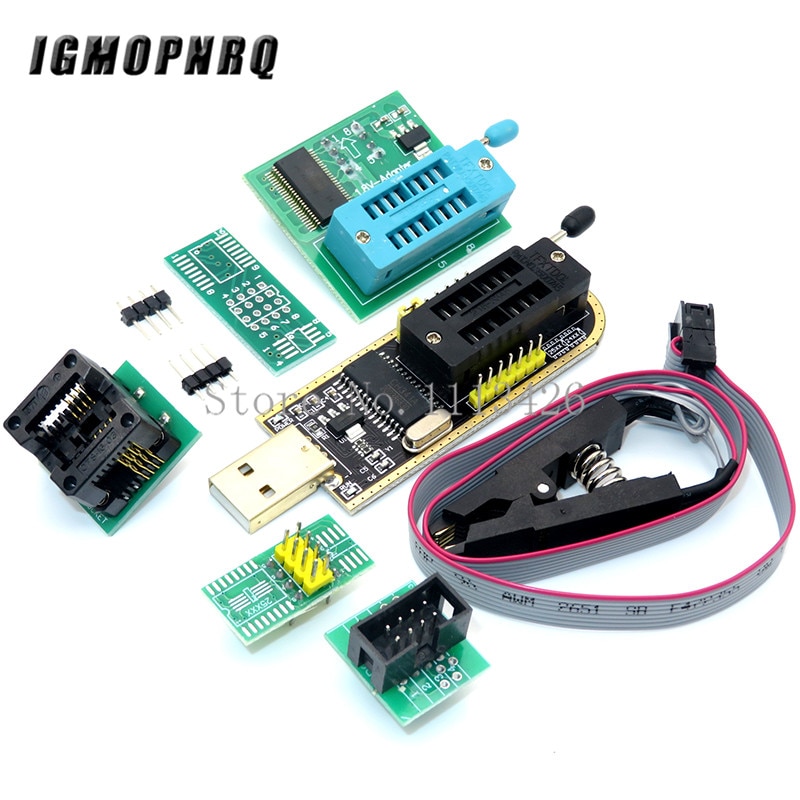 CH341a - minimal usage guide, how to read and write a motherboard BIOS

Hi, I am trying the ch341a usb programmer now on my bricked Huananzhi x99-tf motherboard. But the application cant find the IC of the motherboard which is w25q128jv, I also checked the chiplist of the AsProgrammer and it is not there. Is there other application that recognize the IC of x99-tf?

There is only w25q128bv and w25q128fv on the AsProgrammer. Do I need internet connection to find the IC? I supply power ti the motherboard with the 24pin and EPS, and the ch341a is being detected by the AsProgrammer. Is there something else I need to do?

JD, internet connection is not needed and you can use either of the proposed options, start with the first one - W25Q128BV.

Hi, I have a fake chinese GTX1050 card, which originally is some GTX460 or something - do you have any idea if I can re-flash the bios of this VGA card with this programmer? Thank you!

Sorin, you might be able to do that, take of the GPU cooler and see if you can find the BIOS chip, just make sure to flash a compatible BIOS.

Hi. I was having an issue identifying the bios chip of a bricked motherboard and I thought I was doing it wrong. But I tried to read the bios of a working motherboard but none of the tools are able to identify the chip as well? What could be the issue?

AR, did you connect the power supply to the motherboard? If yes - you might need to manually shorten the PSU pins to start it up and supply extra current to the motherboard. Which pins are supposed to be connected you can see in this video - How To Jump Start A Power Supply (PSU).

The OS that I have been using is Windows 10 with the latest version.

AR, you can try to shorten the pins from the other side of the 24 ATX power connector, but don't try to start the motherboard, it won't help.

The OS that I have been using is Windows 10 with the latest version.

Miyconst, Ok, I see what you mean. I will try that with my bricked motherboard.

AR, it's hard to say why it's not recognized, most likely it's lack of the electrical current. Some motherboards have physical layout which requires to desolder the chip to get it identified.

Miyconst, Thank you so much for you help. Your suggestion of connecting the 24-pin power to the motherboard and then shorting the 24-pin to provide power to the motherboard worked like a charm! Thank you so much. You may want to add this trick to your tutorial somewhere because this was great! I was able to successfully detect the IC, read it, unprotect, erase, write, and verify. Now I just have to get a CPU for the board to see if it is fixed :) Wish me luck!!

Hey so I got my CPU in and still the motherboard boot loops. But this time it seems to be taking a lot longer when it shuts down. As for asprogrammer how do you know you did the unprotect correctly? I’m worried that erasing did not work and it was not really writing the new bios file. Also I have a gigabyte motherboard and it doesn’t have a cap file. How will I know I need to extract the bios rom?

Disregard my message. It works lol. It took a while and I just let it cycle with the boot loop. Each loop got longer and longer until it started the load bios default screen. Everything so far works!!

I brought a CH341A but i need help finding the IC to connect it in a Huananzhi x99-F8... Could you please post a pic? or any help?

Thanks in advance from Portugal

Helder, the BIOS chip on Huananzhi X99-TF/F8/T8 boards is located under the chipset heatsink.

Miyconst, Thanks! was allmost hidden :P have you tryied the BIOS-iEngineer bios?

Myiconst, my Kllisre x99-D8 have nothing writed on bios chip, how do i recognized what chip is? You have a x99-d8, can you tell me what bios chip it is?

Miyconst, Hi, just to add my experience, I tried with the original bios (the one that came with the mobo), the last in the Huananzhi page and the iEngineer: even when the current bios (Dated 2020-8-17) hasn't the possibility of tigh timmings (or i didn't found how), it give me the better results in bechmarks and, at least for me, resolve some issues with my front pannel audio. The ones of iEngineer (CX99DE25 and CX99DE26), takes a lot of time to start, and also has no the capability to do TBU, I did not note any improvement with them (maybe I lack something), and also they show an annoying lenovo screen that makes me mad at, Regards.

By the way, I'm talking about Huananzhi F8 mobo, regards.

The numbers on the chip is Winbond 25Q128JVSQ 1949. I tried to set the chip to W25Q128BV, FV and FW_1.8 without any luck. No ram, no video card and cpu removed. Just board, power supply and reader/programmer.

It successfully erased it and now reads all FFFFFFF.

Any suggestions? I looked for the chip in the IC under SPI then Winbond. The board is two days old. A two day old brick. I am using Windows for the AsProgrammer app. Thank you, Stan

Stan Texas, I had the same issue as you when there were not enough power from my USB port, once I connected my CH341a into a USB port with fast charging support, it worked well.

JD, did you manage to get the IC recognized by Asprogrammer?

I tried multiple times to get it to work and reprogram it without any success. It just would not read or write the bios to the chip. I ended up swapping out the board with another Machinist X99 V1.02. I am not going to attempt it again on this board. Miyconst, thanks for trying to help and for your channel. I am a fan.

Hi, I bricked my huananzhi x99-TF motherboard with 25Q128JV bios chip, the chip is hidden behind the cmos cooler. I have solved it with ch341 a and the program asprogrammer (latest version) choosing the one finished in BV ...... MY MOTHERBOARD IS WORKING AGAIN !!!!!

It's sad to say, but..
Due to the enormous amount of spam I have decided to disable comments on my website. Feel free to contact me through any other available channel.